First Great Lesson: God Who Has No Hands

God with No Hands is a slightly modified version of Mario Montessori’s publication in Communications in 1958, originally told by Maria Montessori.

The story is not meant to give just one idea of how creation came about; it is meant to contain some tidbits of factual information in a story format. 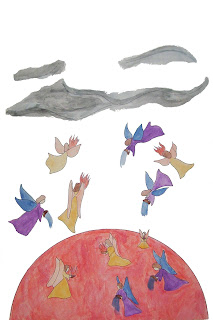 The tone of the story should arouse more than just the children’s interest but also his admiration and wonder if the idea of the universe has been presented properly to the children.

The story can be told in one’s own words and the guide must be comfortable with the version of the story told; the children are sensitive to hypocrisy. The guide must love the story that is told; make the story your own; much practice allows for comfort in the telling.


The story can be either told or read as the guide needs, but the tone needs to maintain enthusiasm and other aspects noted above. In the environment with children, throughout the following days, weeks, months and years, the guide can return to the story and recount specific sections, or fill in forgotten pieces.


Our goal? We hope the children begin to feel appreciation towards creation and the Creator.

Materials for each Great Lesson