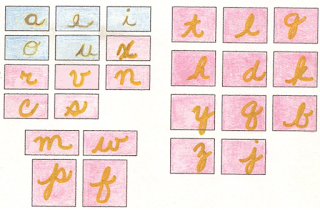 Materials
Box containing the letters of the alphabet, lower case and cursive, made of sandpaper cut out and mounted on thick cards or wood; consonants on pink, vowels on blue.
11 small letters – 4.25x7.5 inches: a e i o u x r v n c s
11 medium letters – 6x7.5 inches: t l g h d k y q b z j
2 large letters – 4.25x9.25: m w
2 extra large letters – 8x7.5 inches: p f
The letters are placed on the right side to hold the card with the left hand; or place them centered on the lower section of the card for use by both hands.

Lines are not necessary, providing only an unnecessary crutch for the child.

Sensitizing tray and a tray to carry the letters.

Display: Most letters are in the box but a few should be displayed on a reclining stand and rotated frequently.

Guidelines to Follow
¨ The interest of the children (i.e. first letter of child’s name)
¨ Use three letters: one vowel and two consonants.
¨ Have a few letters on display and rotate them frequently (or child can do so).


Direct Aim(s)
To help the child become conscious of sounds in spoken language and to associate the sounds with the symbols through visual, auditory, tactile and kinesthetic senses.
Introduce the letter combinations in English that change their phonetic sounds.


3-3.5 (after much work with the geometry cabinet)

Endnote(s)
*Color backing should coordinate with the movable alphabet.
*Show a left-handed child how to hold the card with his right hand and trace with his left.
*Cursive is chosen over print because it has a more natural movement and is easier to form the continuous flow of each letter. It helps eliminate the reversal of letters such as b and d. Since most children know the names of the print letters, it is easier to give the sound of the cursive letters as a new experience rather than change the child’s current matrix of knowledge.
*The sandpaper letters are always presented at a table for correct writing posture.
*The sandpaper letters are the key to the whole world of written language. When Montessori was asked how the children in the first casa learned to write and read she said, “I gave them the alphabet.”
*The letters should be given in a lively and interesting manner.
*They should be presented early and fairly quickly (within three months). It is therefore critical that we keep track of the letters we have presented. Children who enter at the age of four and older many not have the same interest in tracing, so it is helpful to say to them, “Tracing will help your hands know how to write.” You can use the sandpaper letters and chalkboard together, or in games that involve fetching letters. Anything to help instill interest. The moveable alphabet may be used for sound consciousness as well, although this does not give the muscular experience that leads to understanding. 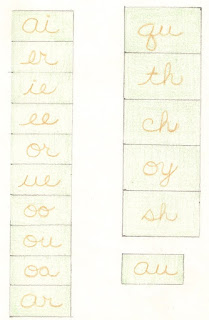 Materials
A set of figures 0-9 cut out of sandpaper and mounted on separate green boards (zero is placed at the back of the box); sensitizing tray.
Size: about 3x6 - no specific dimensions 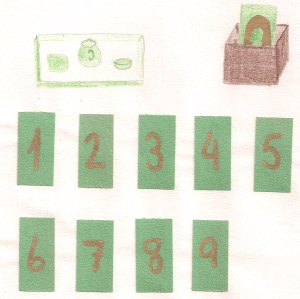 Age
Approximately 4, after work with the number rods.

New Information
Association of names of numbers with their corresponding symbols.

Endnote(s)
Present ciphers only when the child knows the names of the number rods. This presentation is always done at a table or chowki due to its preparation for writing numbers. The presentation is similar to the sandpaper letters, noting that the letters correspond to a single sound while the cyphers correspond to a whole word signifying a specific quantity. Present 1-9 after working with the number rods, returning to 0 after work with the spindle box. Other continuing with the sandpaper letters (tracing on chalkboard and paper, etc) should incorporate the cyphers.